When Sunday’s roll around what do we normally think of? For some, we get up early and head to church then race down to the nearest restaurants before the Baptists show up. I can say that because I am Baptist. 🙂 Anyway, for me I had manicured my lawn and decided it was a great day to cook out on the old trusty, not rusty charcoal grille.

I have a few steaks in the freezer so I decided to pull out three of my Mid-Western Strips. Beautiful cut with the right amount of veins of fat for flavor. At times I will not even add anything to a piece of meat for the outdoor grille, sometimes I may go over the top. Depends on my mood. Instead of the typical mesquite or hickory seasonings I decided on something else. I’ve never really been a big fan on teriyaki but today felt like a great day to introduce myself to flavor.

After thawing out the steaks, I put them in a quart size freezer bag. A while back I had been given by my sons a Jim Bean Gift Basket. Hey, my kids don’t buy me ties, they buy stuff for the kitchen! They know they will reap the benefits! With the steaks in the freezer bag, I poured half the bottle of the Jim Bean Teriyaki Marinade over the top of them. The bottle is small so don’t think I dumped a quart of it in. Then I added some Arriba Hot Chipolte Hot Sauce. This stuff will make your eyes water. I wasn’t a fan of them in the past, but truly they have come along way for those of us who like it hot…the first time around that is. lol

Not using much, about 4 or 5 shakes of the hot sauce then a generous amount of black pepper. What’s a good steak without black pepper? Course, not fine.

I placed the steaks in the frig for about 3 hours. As I had other things to do and it was still early in the day to do other things. Before I lit the charcoal I was in the kitchen preparing homemade Potato Skins. I will blog about this separately. You’ll want to read about it too!

Back to grilling. I fired my charcoal grill up and let the coals burn down till they were all white. At times, I will cook on the downside of the fire, as I do not like it so hot. I prepare to slow cook. Today, when the charcoals turned white I was ready to cook!

I removed the steaks from the freezer bag and placed them on a plate. I added a bit more black pepper.

As of some of you know the hottest part of the fire is directly in the middle, especially when cooking with charcoal. I place my steaks in a circle on the outer portion of the center hotspot. Now here is something to remember, there are vents at the bottom and top of charcoal grilles. They are there for a reason! At the bottlm I open the vents halfway, at the top I open them at quarter to halfway. I do not want to smother the fire, but keep the airflow going and for the smoke to circle around the meat evenly.

Now the best part of this is it’s only going to take about 10 minutes to cook them medium-well to well-done. For those of you who do not know me, my ‘well-done’ is juicy and not dried out! About 5 minutes on each side is all you will need. Once the top is turning a light shade of brown, it’s time to flip them for the final five minutes. What I do is when you are cooking with a hot fire, flip your meat in the opposite direction. What I mean is, when you turn your steaks the side closest to the fire should now be to the outer edge of the grill. This way you do not over cook the same edge of the steaks. Your meat will be cooked evenly and the color will be amazing! 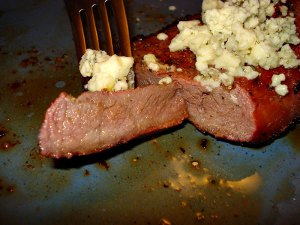 Remove the steaks from the grill and serve! This time around I added some blue cheese crumbles to my steak. Do you see in the photo how juicy they are? Very tender and even color throughout. From the first bite you pick up the teriyaki flavor followed by a tangy warmth from the chipolte. I like alot of juice for my steaks and at times if they are not juicy enough…here’s a trick that works wonders! Place a pat of butter under your steak. The heat of the meat will melt it quickly giving you some added juice and the adds a wonder flavor! Do not use margarine, just butter. I usually do this in restaurants as I seldom can get a juicy well-done steak. Now if you are going to use ketchup on this steak. I’m calling the Steak Police. Don’t dishonor the steak!

See how easy that was? Another quick, easy and very healthy meal! Add some corn-on-the-cob, steak fries or even a salad and you’ll be satisfied!

Enjoy and let me know what you think! Next up! My homemade Potato Skins. They’re easy to make and you’ll become the hero in YOUR kitchen!